The Peckham Champion Award recognizes elected officials who have shown outstanding commitment in supporting the employment of people with disabilities and other barriers. Peckham is an AbilityOne social enterprise that provides vocational rehabilitation to thousands of employees every year. Our employees provide essential goods and services for our government through a variety of federal and state contracts.

The Peckham Champion Award is presented to those who support our mission of providing meaningful work to people with disabilities. The recipients recognize the essential work that people with disabilities do every day in our community. They understand that every person deserves to work in a place where he/she/they feel respected, valued, and included.

Peckham presents the 2022 Peckham Champion Award to U.S. Representative Elissa Slotkin for her ongoing support of our mission to provide meaningful work to people with disabilities and other barriers to employment. 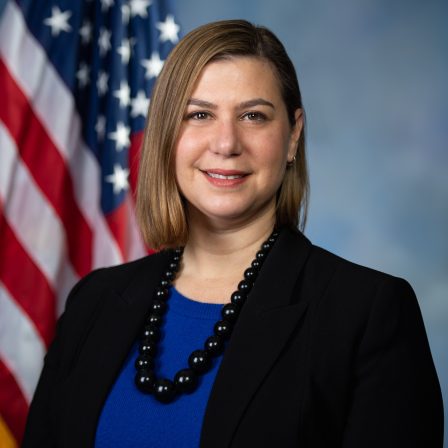 Rep. Slotkin has spent her career in national service. After the 9/11 terrorist attacks, which took place during her first week of graduate school in New York City, Rep. Slotkin knew that national service would define her career. She was recruited by the Central Intelligence Agency (CIA) to be a Middle East analyst and went on to devote her career to protecting the United States from national security threats. In her role at the CIA, Rep. Slotkin worked alongside the U.S. military during three tours in Iraq as a militia expert. In between her tours in Iraq, Rep. Slotkin held various defense and intelligence positions under President Bush and President Obama, including roles at the White House and the Office of the Director of National Intelligence. In 2011, Rep. Slotkin took a senior position at the Pentagon and, until January 2017, she served as Acting Assistant Secretary of Defense for International Security Affairs. In this role, Rep. Slotkin oversaw policy on Russia, Europe, the Middle East, and Africa at the Pentagon and participated in negotiations on some of the country’s most pressing national security issues.

Skip back to main navigation